The 2019 FIRST Robotics Competition Game Destination: Deep Space is a space-themed game which takes place on the fictional planet of Primus in the moments leading up to the evacuation of a research station on the planet. This year, two alliances of three teams each race against each other and the clock to seal Hatch Panels on their Rockets and Cargo Ship, load valuable Cargo for Launch, and return to the safety of their Habitat before the next Sandstorm sweeps through and the base is evacuated. Teams earn points for the number of Hatch Panels and Cargo loaded into their Rockets and Cargo Ships as well as for the level of the Habitat on which they finish at the end of the Game. The alliance with the most points wins!

Unlike previous games, Destination: Deep Space includes no Autonomous Period (the period at the beginning of the game where Robots must be controlled only by pre-programmed instructions). Instead, the game begins with a 15-second Sandstorm period where vision is obscured at Drivers must control their Robots through the use of onboard cameras if they choose to opt-out of traditional Autonomous routines. This adds an additional challenge for all teams - those controlling their Robots through traditional autonomous routines must now account for the unpredictability of Teleoperated Control and those teams driving through onboard cameras must learn to see the field from their Robot’s point of view. All in all, Destination: Deep Space is a challenging game that accurately reflects the challenge of its namesake: Space itself.

After six weeks of Robot Build, Plasma Robotics bagged up their robot for possibly the last time in FIRST History. Earlier in the season, FIRST announced that Stop Build Day would be going away starting with the 2020 Season, and if that holds to be true FIRST Robots will never again be sealed in plastic bags between competitions. With that in mind, we pay tribute to all the Bag and Tag Day has been for many teams, students, and alumni as we look toward the future of the FIRST Robotics Competition. 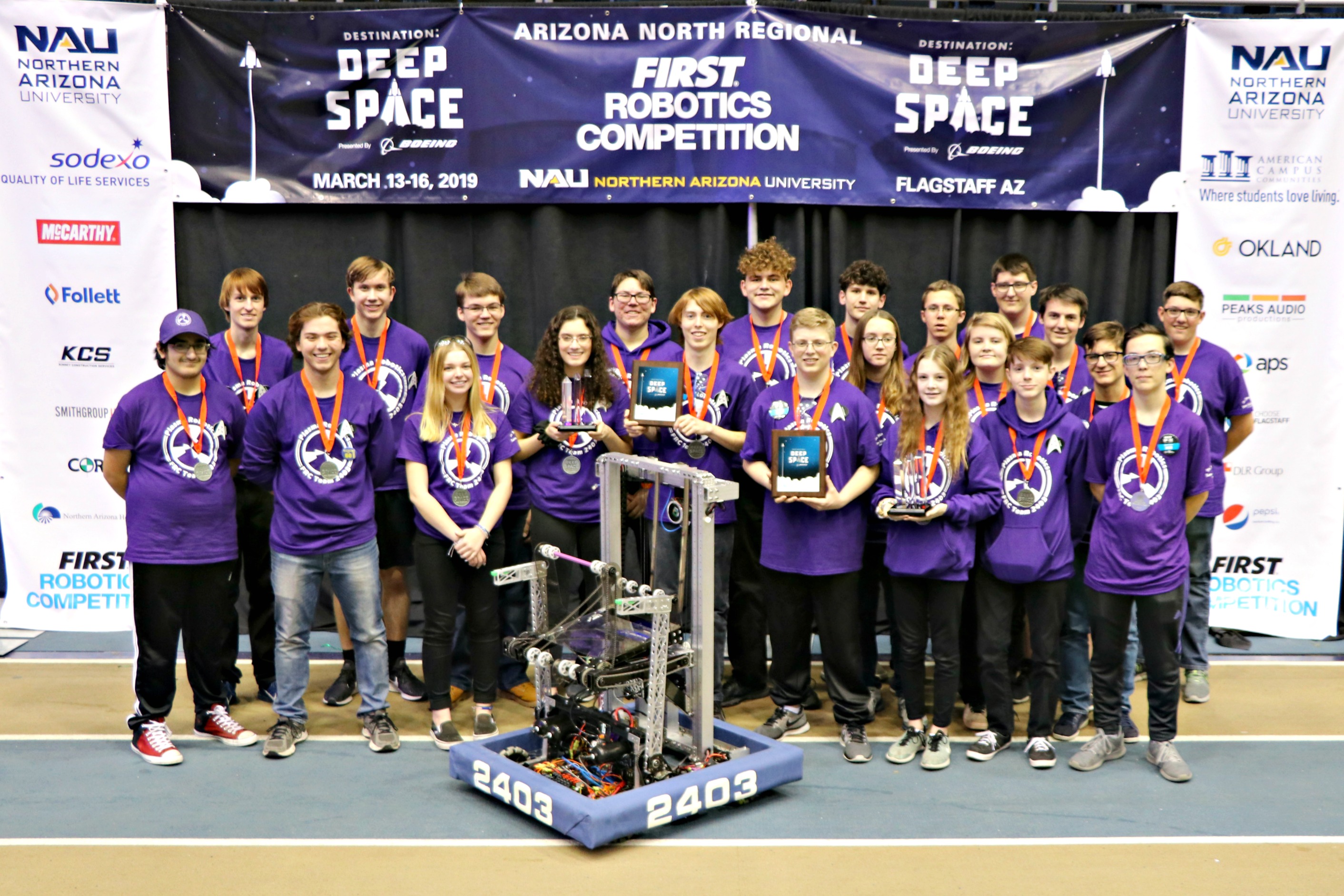 After two more weeks of preparation, Plasma showed off its robot for the first time in competition at the Arizona North Regional in Flagstaff, AZ. While communications issues lead to a rough start for the team during the qualification matches, students and mentors rallied together to make up for lost progress. Plasma Robotics finished the qualification matches ranked 19 with a 4-6-0 WLT Record. During Alliance Selections, Plasma was picked by Skyline Robotics [4565] to make up the 7th Seed Alliance alongside their second-pick, the Bionic Bulldogs [60]. The Alliance played strong from the begining, taking the quarter finals to a tie and beating out the 2nd Seed Alliance and then cleanly beating the 6th Seed Alliance after an accidental red-card and match disqualification. In the end, the alliance was beaten by the 1st Seed Alliance of the Robonauts [118], Westwood Robotics [2478], and The Midnight Cicadas [5059]. For their progress in the finals, Plasma Robotics was also invited to the World Championships in Houston on a wildcard. 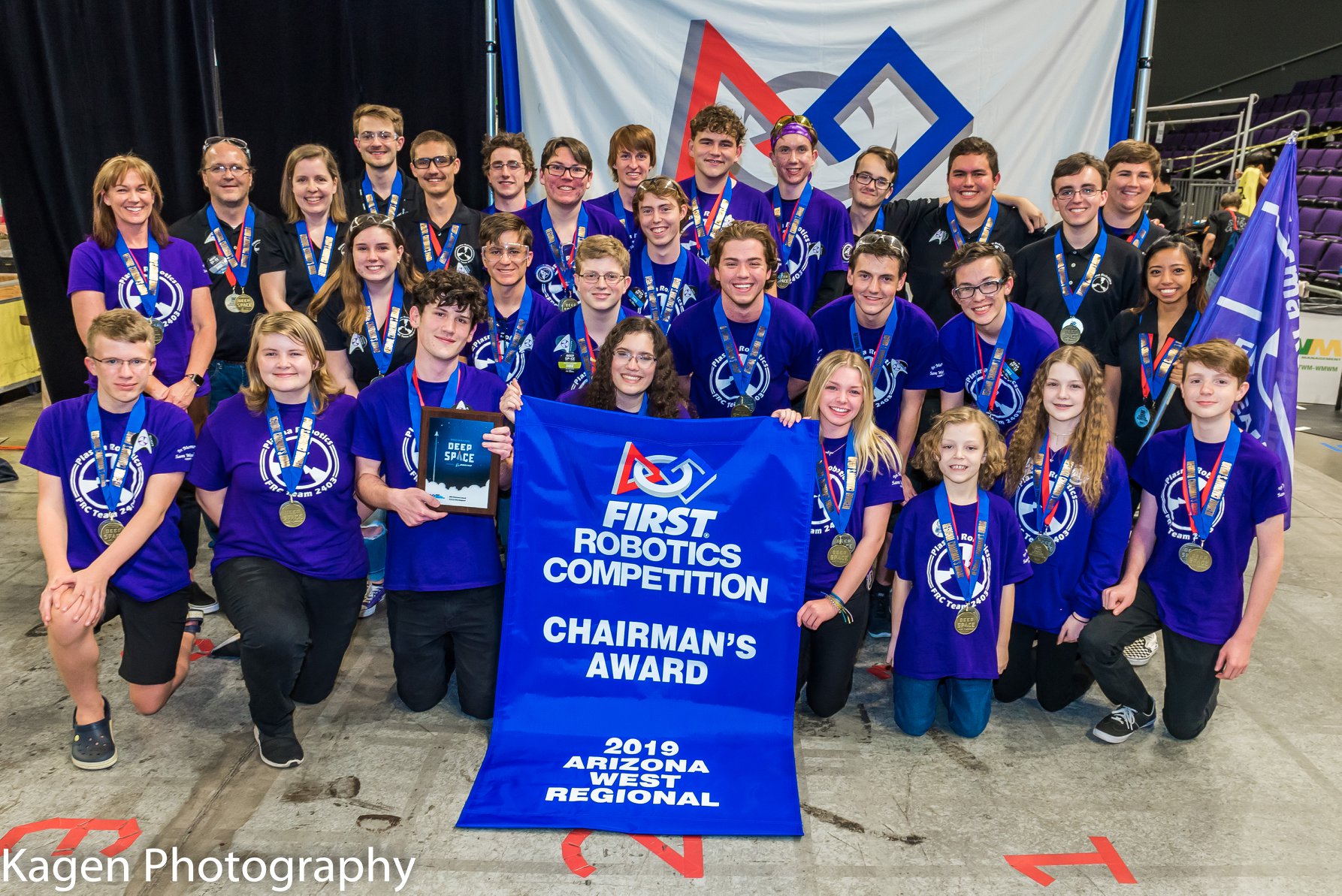 A few weeks later, Plasma Robotics competed in the Arizona West Regional, their second competition of the season. In the weeks leading up to the event, students and mentors alike had dedicated countless hours towards the polishing of their Robot and they arrived with determination to show off the progress they had made. With communications issues solved and improved mechanisms installed, the team quickly rose up the rankings and eventually ended the qualifications matches ranked 2nd with a 10-2-0 WLT Record. In addition, Plasma played a vital role in two of the competition’s three "Unicorn Matches". (A 4 Ranking-Point Match in which an Alliance wins, completes a rocket, and ends with all Robots safely parked in the Habitat). Entering Alliance Selections, Plasma Robotics was asked to join the 1st Seed Alliance captained by Westwood Robotics [2478] alongside Robo Krew [2662] and the alliance prepared for their best. The Alliance saw great success through the quarterfinals and semifinals but were unfortunately knocked out once again during the finals, this time due to unfortunate robot malfunctions throughout the alliance. However, after their dissapointing defeat, the team was happy to end the day on a high note with their second Regional Chairman’s Award win in team history, being met with much excitement.

Energy levels were high upon arriving in Houston for the 2019 FIRST Championships. Team members were excited to meet up with their friends from teams around the world and hoped that their repairs and improvements on their Robot would pay off in their success among the best of the best. In the qualification rounds, Plasma saw great success, ending rank 8 with a 7-1-2 WLT Record and ready to build an alliance for the Playoffs. During the Alliance Selections, Plasma Robotics rose to captain the 6th Seed Alliance and invited Pigmice [2733], Lunar Kitties [5930], and N.E.R.D.S. [1726] to join them. The Alliance saw continued success in the quarterfinals and semifinals, cleanly winning all four matches. The finals brought a greater challenge with the Alliance facing off against the first-seed Alliance of The Cheesy Poofs [254], Black Hawk Robotics [3310], PPT bots [6986], and NRG (Newport Robotics Group) [948] and although the Alliance had strong defense that managed to essentially shut down Black Hawk Robotics for a significant portion of both matches, the first-seed Alliance eventually won out. Regardless, this was an amazingly successful Championships run with Plasma Robotics making it to division finals for the first time in team history and ending as Championship Division Finalists.

Desitination: Deep Space was a great year for Plasma Robotics and one of their most successful so far. We look forward to more great seasons in the future!