The 2018 FIRST Robotics Competition Game, FIRST Power Up, was a game unlike no other! Power Up is a video-game themed competition in which alliances race against each other and the clock to score as many points as possible through the use of Power Cubes (fabric-covered milk crates). Alliances primarily earn points through placing the most Power Cubes on their section of the Switch and Scales, thus controlling them. However, Alliances earn one point for every second they control a Switch or Scale, and so they must actively work to control them throughout the match.

Teams may also earn points through transfering Power Cubes to their Human Players who place them in the Vault. Alliances earn five points for each Power Cube placed in the Vault in this way. Once there are enough Power Cubes in the Vault, they may also activate one of three "Power Ups", which either force control of the Switch and Scale, double the rate of point accumulation, or give the alliance a free climb credit for the end game.

After the main phase of the game is over, teams may climb their side of the Scale in order to gain more points and "Face the Boss". However, there is only one climb rung for each alliance, and so this requires more creativity in order to gain the most points. The Levitate Power Up solves part of the problem, but many teams also developed a system on their robots which allowed them to climb with another robot conntected to them. 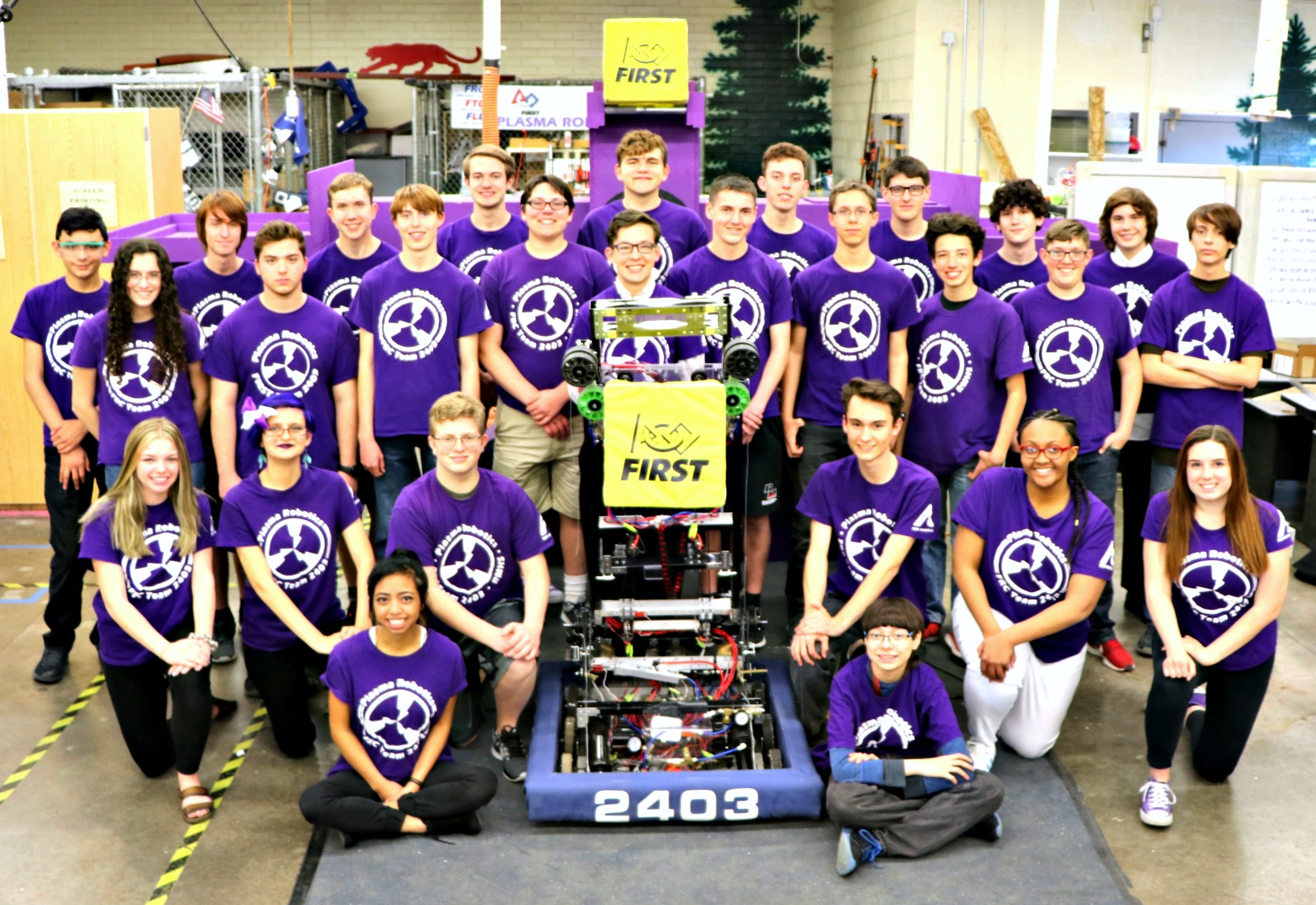 FIRST Power Up was an extremely successful season for Plasma Robotics. At the Arizona North Regional, Plasma ended Qualifications ranked 24 with a 5-4-0 WLT record. The team was then picked as part of the first seed alliance with The Cheesy Poofs (254) and Falcon Robotics (842) and remained undefeated throughout the entire elimination round, thus earning the first Blue Banner of the Season as Regional Winners. A couple weeks later at the Arizona West Regional, the team was excited to improve the Robot and show the rest of Arizona what they could do. By the end of Qualifications, the team was ranked 1 with a 10-2-0 WLT Record, thus positioned as the first seed alliance captain come time for Alliance Selections. The team asked Westwood Robotics (2478) and Blue Tide (2840) to join their alliance, and entered the elimination rounds with the goal to win it all. That goal ended in success, with the team winning their second Blue Banner of the Season. The team was also pleased to be awarded the Innovation in Control Award for their unique robot controll systems.

Due to their Regional Wins this season, Plasma Robotics also qualified for the FIRST Championships in Houston, TX. In addition to the Robot Game, Championships is also a great way to meet new teams and is a ton of fun! This year, the team was placed in the Newton Division and was excited to compete with the best of the best! Among teams from all over the world, the team ended Qualifications ranked 11 with a 7-3-0 WLT Record. In alliance selections, Plasma Robotics rose to the eigth seed alliance captain before being picked by the Circuit Breakers (4513), a team of which members had gotten to know through the help of the FRC Discord Server. The two teams also asked the Stealth Tigers (3164) and Ground Control (5663) to join their alliance. However, the alliance was unfortunately eliminated in the Quarter finals by the alliance consisting of the Citrus Circuits (1678), Up-A-Creek Robotics (1619), SciBorgs (4061), and The FBI - FIRST Bots of Independence (1723) who would go on to win the Newton Division and advance to Einsteins. Overall, the team was happy with their performance at the FIRST Championships, and it was definitely a great end to a great season!